Upstate New York in October? Yes, please! ShopBot had the privilege of being a part of one of the largest gatherings of makers in the country in October at the Blackthorn Resort in East Durham, NY. The Catskill Mountain Makers Camp is hosted by Austin Handel, part of the family-owned resort, and Jimmy Diresta (who you might know from NBC’s “Making It,” or his popular social media channels). Established in 2019, this was only the 2nd in-person Makers Camp, and we see this event getting bigger each year.

Makers Camp takes place in a huge field on the grounds of a popular summer retreat, nestled in the Catskill mountains, full of masters of their crafts and hundreds of fellow makers and fans of the scene. There was everything from blacksmithing to woodturning, resin crafts, welding, vintage tools, guitars made from recycled materials, powder coating tutorials and of course, CNC Tools. After the daily demos and activities wrapped up, Makers Camp turned into a giant party at the pavilion bar, with plenty of socializing amongst karaoke the first night and live music the nights following.

At the CNC tent (Sponsored by ShopBot Tools), George Vondriska demonstrated the versatility of our tools with our Desktop model by working with a variety of materials such as aluminum, glass, plexi, Trex composite, PVC and wood. We were pleased with the high level of engagement from attendees and fellow demonstrators alike. Our space was shared with the super nice folks at Shaper Tools who displayed handheld router-style CNC tools. We staggered our demo sessions as to not overshadow one another. Life is easier when you help each other out!

When we made time to explore outside the CNC tent, we found the Makers Camp to be alive with chatter and laughter from attendees and demonstrators of all ages. Rock music filled the air from the speakers set up at the chainsaw carving area. Strolling across the grounds the sounds of mallets on anvils became clearer. We heard people were forging until about 4am each night which sounds intense. That’s some serious dedication!

There’s something for everyone at Makers Camp. Highlights included Jimmy Diresta carving items on a recently restored 1920’s band saw, as well as his speech at the quickly completed timber frame build in memory of his late friend and shop foreman, Aaron. The late-night glass blowing demonstrations by Andrea de Leon were mesmerizing. And who can forget the fireball-throwing science class with Midnight Science Club’s Nick Householder! Too much fun!

The grand finale was the “maker burn” on the last night of the 3½ day event. Several builders constructed a massive T-Rex dinosaur made of scrap wood, and managed to engineer it to breath fire through the mouth of the structure before allowing the entire structure to burn to the ground in a blaze of glory. Just about everyone at the event took photos or videos. Look up #makerburn, #makerscamp2021 or the official Makers Camp IG account for more media. For more photos check out the talented Mark Adams and Eric Smalkin. There was no shortage of photo documentation, that’s for sure! 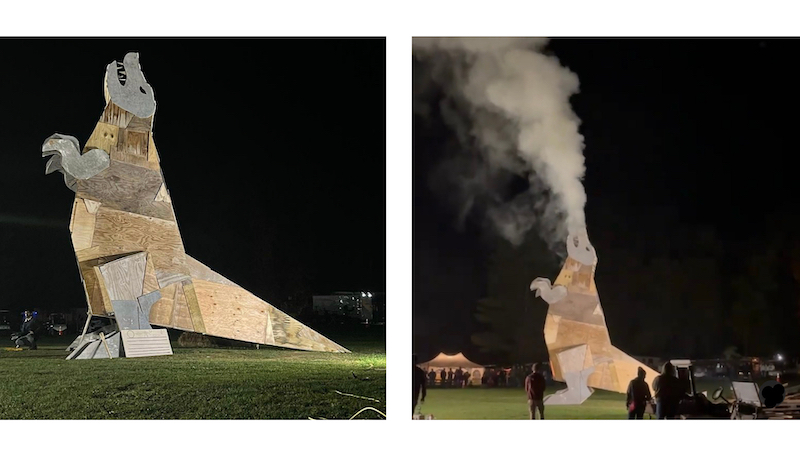 We plan to be a part of this great event next year and we’ll have a new set of demos and tools to learn about and interact with. There’s already talk of collaborations for next year that will surely make for a great time.

© 2006-2021 by ShopBot Tools, Inc. All rights reserved.
Terms of Service
ShopBot Tools Warranty
All information is correct to the best of our knowledge but prices, descriptions, and typos may change without warning.
All prices and costs published by ShopBot (both digitally and in print) are based on orders within the contiguous USA.
All other orders may incur additional costs/fees.