A motorcycle with carved foam body panels caught my eye when searching for a ShopBot user to feature. Before reading the description of this photo on Instagram, I could tell this was some sort of mock-up. I had to know more! Turns out, this interesting shape was designed with Fusion360 CAD software and milled with a ShopBot CNC. The motorcycle belongs to industrial designer, Ryan Logan of NYC. With a degree in Product Design, and the power of digital fabrication software and hardware, Ryan reimagined a classic motorcycle with a touch of modern style and features. This project began as an experiment worked on between classes at Parsons School of Design and turned into a passion for prototyping. Ryan is one of the Community Prototyping Lab Managers at Newlab in Brooklyn, NY. This is his story. 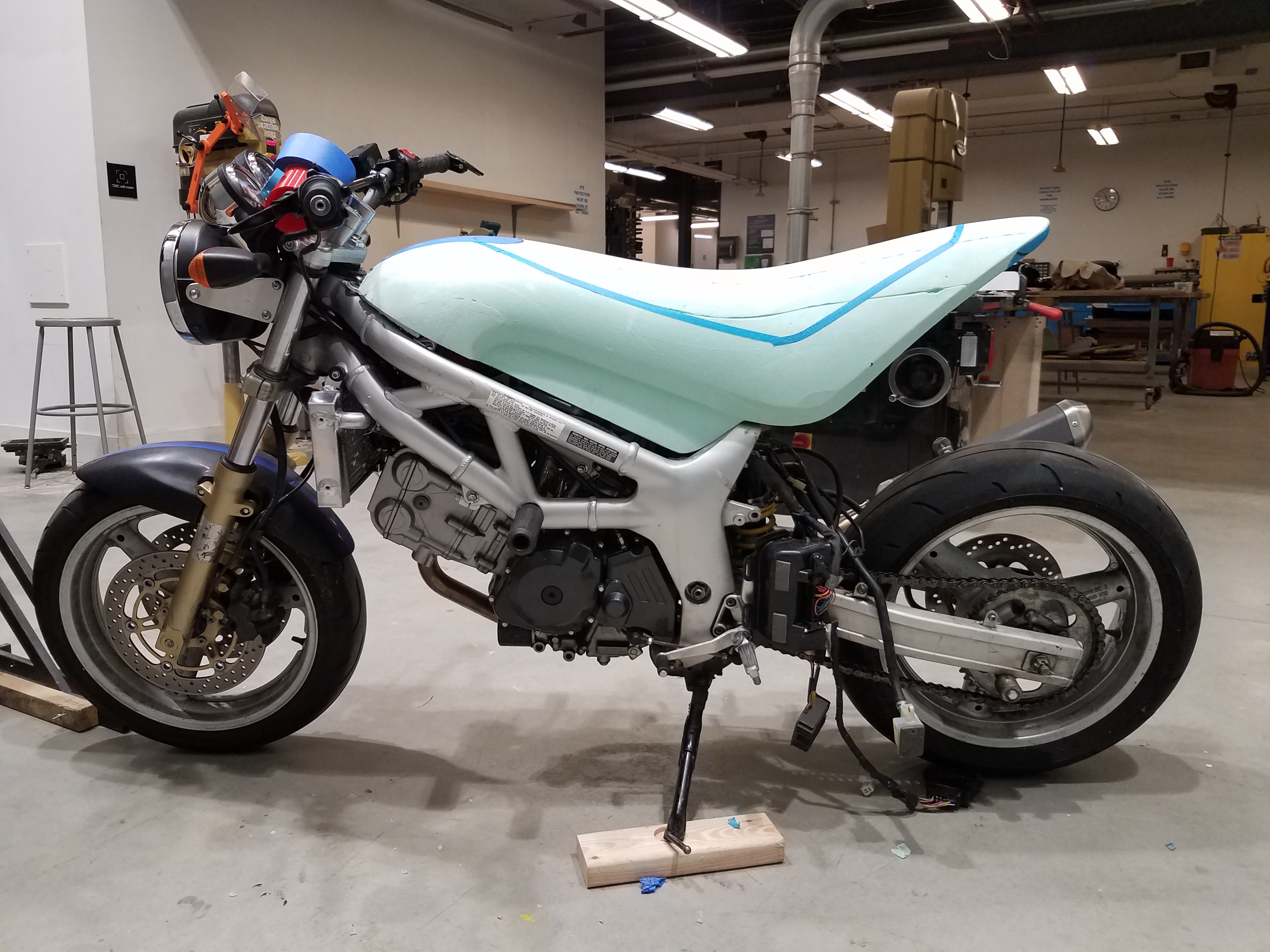 Ryan’s interest in motorcycles came to fruition at a very young age. He grew up in a town near a reservoir that had a long road alongside where motorcycles often raced through. Around age 10, Ryan discovered that one of his neighbors had a motorcycle and like many impressionable boys, he begged his parents to allow him to get one. Like most reasonable parents, they denied this venture, but Ryan knew one day he’d own one. A few years later, he managed to get one to work on. “At age 12 I traded a $50 Walmart gift card for an old 70’s Yamaha Motorcycle that my brother found on the train tracks.” While Ryan’s parents didn’t love that he obtained this item at such a young age, he admittedly didn’t know how to get it running on his own, lessening the worry of getting into too much trouble. “I tore the thing down and spent hours researching, but eventually broke down and pleaded with my Dad to drive me to the local repair shop (with the bike by then partially in milk crates) to get it fixed. The repair cost was about as much as my summers savings from cutting neighbors lawns, but I was more than happy to pay. The hobby might have started in a bit of rebellion, but I think eventually my parents saw the positives of it.” We talked about catching the “automotive bug”, which I have in common with him. It doesn’t go away!

“When you get the bug for cars or motorcycles, it’s always in the back of your mind. The motorcycle is something I started working on between classes in college. We didn’t have motorcycle design classes, but I thought I could take the knowledge from my design classes and apply it elsewhere.”

Ryan’s focus with his personal motorcycle project lies mostly in the body work, however, while modifying (or reimagining) this aspect, there are subsystems that also need to be relocated or redesigned to function as originally intended, with the end goal of improving form and function.

“My intention with the motorcycle is to take the pre-existing platform and reconsider its visual style and also suit the ergonomics to fit the style of riding I prefer. It’s a café racer that I’m turning into a super moto.” 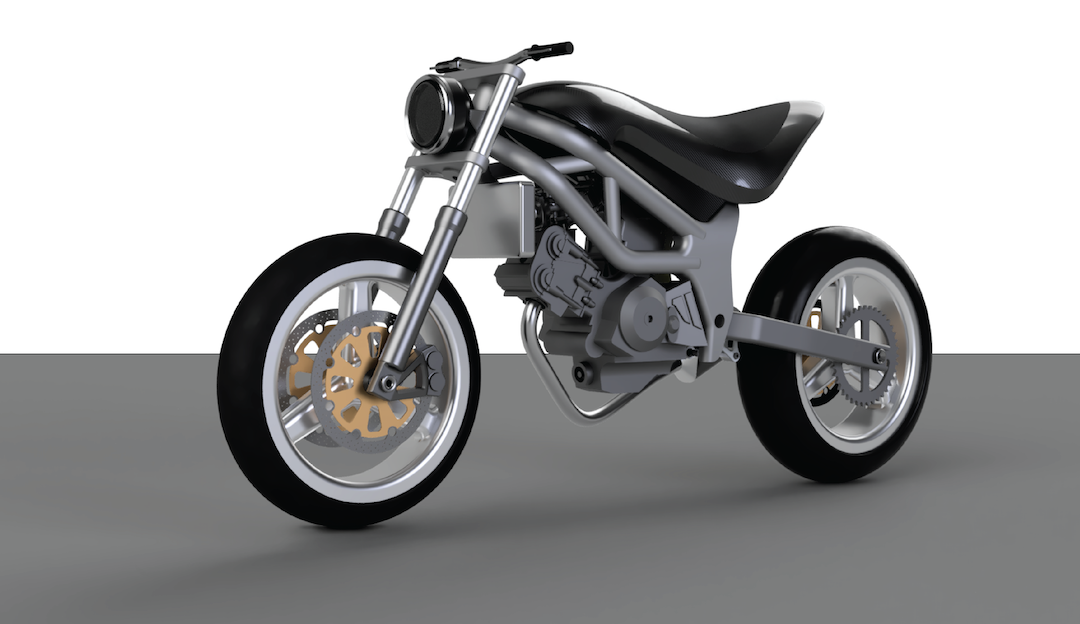 Right after college Ryan took on Contract-based architectural fabrication work. Then the automotive bug led him to a job with a vintage auto racing repair and build shop for a short period. “Had I not gone to college, that would have been my dream job.” This job further helped Ryan realize that he should apply his Product Design background and new auto shop skills to his love of vintage motorcycles. Serendipitously, Ryan was contacted about a job opening by a friend that he worked for as a student tech at Parsons. The job was for a place called Newlab in Brooklyn. Upon checking out the large building where Newlab is housed, there was an electric motorcycle demo taking place. Without much hesitation, Ryan though, “ok, I’m sold! What do I need to do to be a part of this?” Soon after, Ryan got the job and hasn’t looked back.

Ryan was recently promoted to manager within the prototyping team at Newlab. Similar to a prototyping lab in an academic environment, New Lab allows its members to utilize various high-tech tools and the expertise of the prototyping staff to help create just about anything they can imagine, from cabinet-making with CNC to 3D printing and beyond.

New Lab houses a ShopBot PRSalpha 4x8 which is the same machine Ryan had access to in college. He uses Fusion360 for the CAM side of things and uses Vectric VCarve CAD/CAM as an option for the member community at New Lab. “VCarve is the unsung hero of ShopBot’s potential. It’s sometimes described as basic software, but it’s not basic! It can do very complex things very easily. It’s actually awesome.” 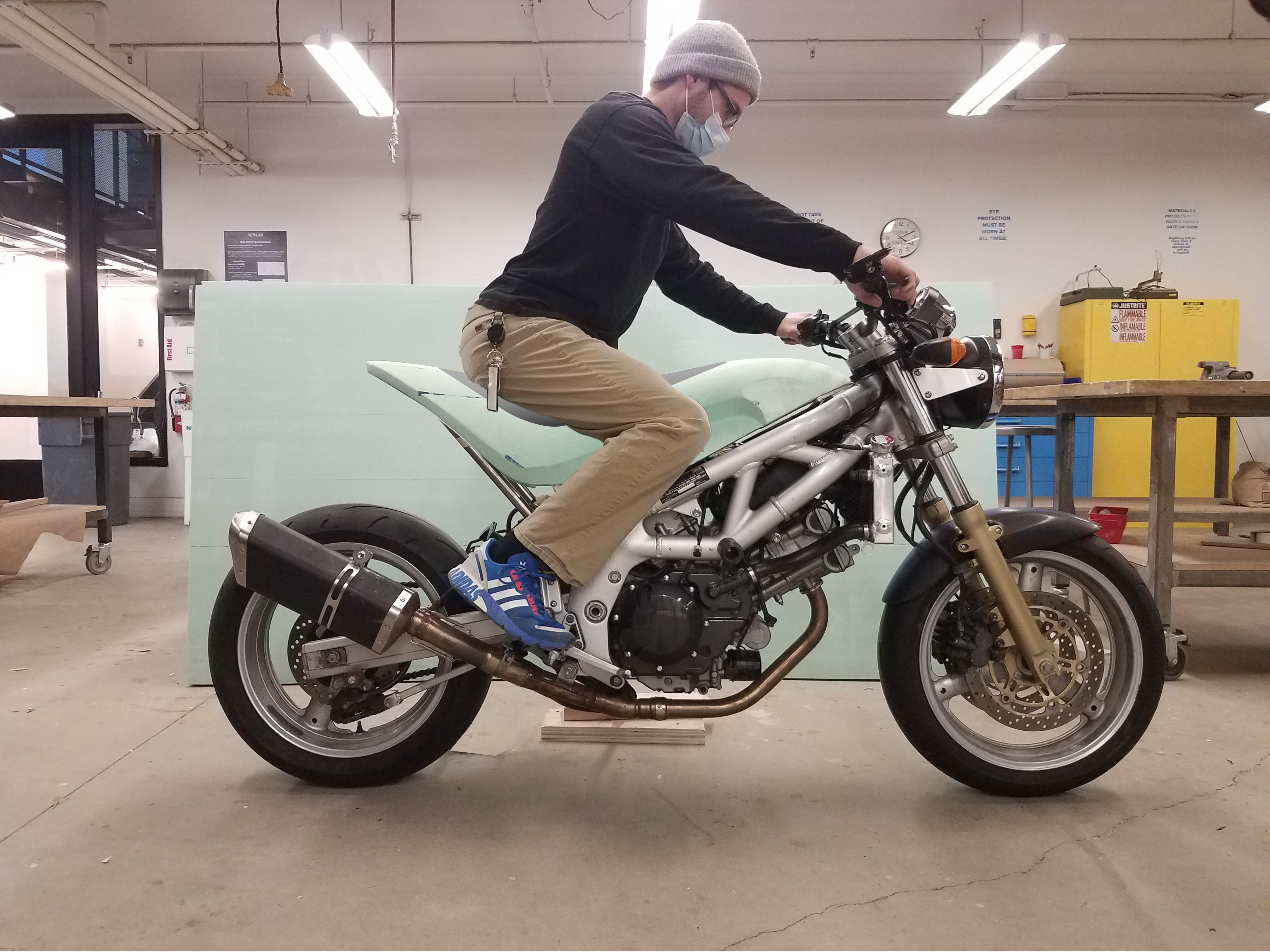 Ryan intends to complete the redesign of his motorcycle very soon and we can’t wait to share the final result! Ryan is also working with his team at Newlab to offer services that bridge the gap between prototyping and production-ready items. For more info on Newlab and to view more of Ryan’s work, check out the links below.