In rural Washington state, along the southern corridor of I-5, Castle Rock High School houses a large ShopBot tool that had been busy collecting dust rather than making it. I, ShopBot’s Sallye Coyle, was on a mission to change that. 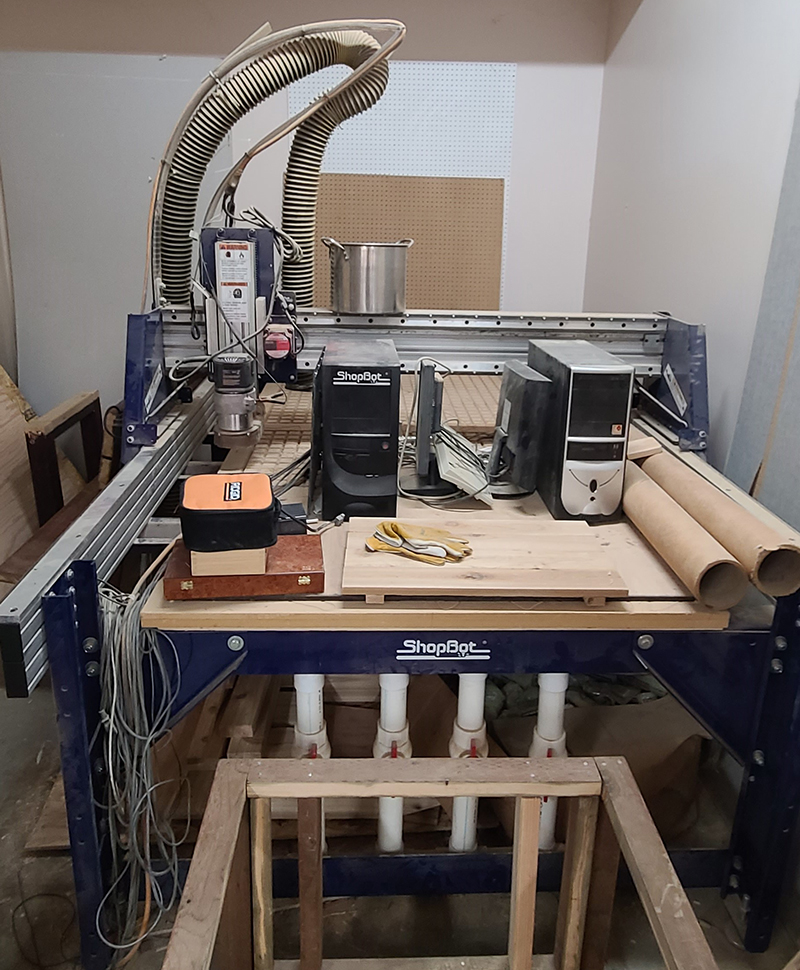 Castle Rock has a variety of programs including health care services, education, construction, farming, and fishing & forestry. The high school also supports CTE programs that prepare students for confidently entering the work force upon graduating. With all of this in mind, there’s no question that they needed their CNC machine to be up and running—to train and inspire the next generation of industrial designers and artists alike!

Two former graduates of the school who became teachers set our story in motion. This is the process of “Reviving a 2008 ShopBot in 2021.”

Not too long after the school purchased their ShopBot, the woodshop teacher left the school, leaving the machine to incoming teachers whose focus shifted to more familiar tools, leaving the world of CNC idle. Enter LJ Krukenberg and Jake Fittro, graduates of Castle Rock and current teachers in the welding and wood/home construction programs. In 2019, LJ contacted ShopBot Support to find out if the machine languishing in a corner could be resurrected. He sent pictures and a message: "I have been told the machine needs work but have no idea on where to start. Is there any way to get someone to come out and make the repairs and make any updates? If so, what would be the cost to get someone out to diagnose the machine?" Tom from Tech Support wrote up a quote for 3 days on site at the school: One day for troubleshooting and maintenance, and two days for training the teachers to use the CAD/CAM software and run the ShopBot. The school also ordered a current version of VCarve Pro CAD/CAM software.

Production Support Service visits start with a conversation between the service tech and the customer. During the initial phone conversation with LJ, I learned that LJ runs a plasma CNC, so he is familiar with CAD/CAM. Jake is skilled in traditional woodworking and home construction but has not spent much time with digital fabrication. We agreed that since Castle Rock is only about an hour north of my studio in Portland, I could easily split the service call into several visits, with the first visit troubleshooting and tuning the ShopBot. Then, if any parts were needed, they could be ordered before the next visit. LJ and Jake were tasked with clearing out the ShopBot area, contacting IT to get a computer ready to receive the current ShopBot software, and finding any parts or supplies that may have found their way to other parts of their shop.

On the day of the first visit, in this period of COVID, I checked into the front office, had my temperature checked, and was shown to the shop area, following the “one-way” arrows. Few kids were in school, and everyone was masked. After meeting LJ and Jake, I was left to explore the ShopBot in peace.

Here’s what I found:

The Mechanicals: At one time, this ShopBot was well-used and well maintained. It had a plenum for a vacuum table, and a vac pump, but no bleeder board and the manifold for the vacuum hold down system was not intact. A sacrificial board was screwed down to the plenum, and a history of projects evident on the ShopBot table. Other than the pinion gears needing to be tightened in the rack, the mechanicals were in good order (albeit dusty). No dust collector evident. Ways to handle the dust collection hose and motor/sensory cables could be updated. The dust skirt was an old version that could use an update. The router had a ¼” up spiral bit in the collet with no collet wrenches or other CNC router bits in evidence. 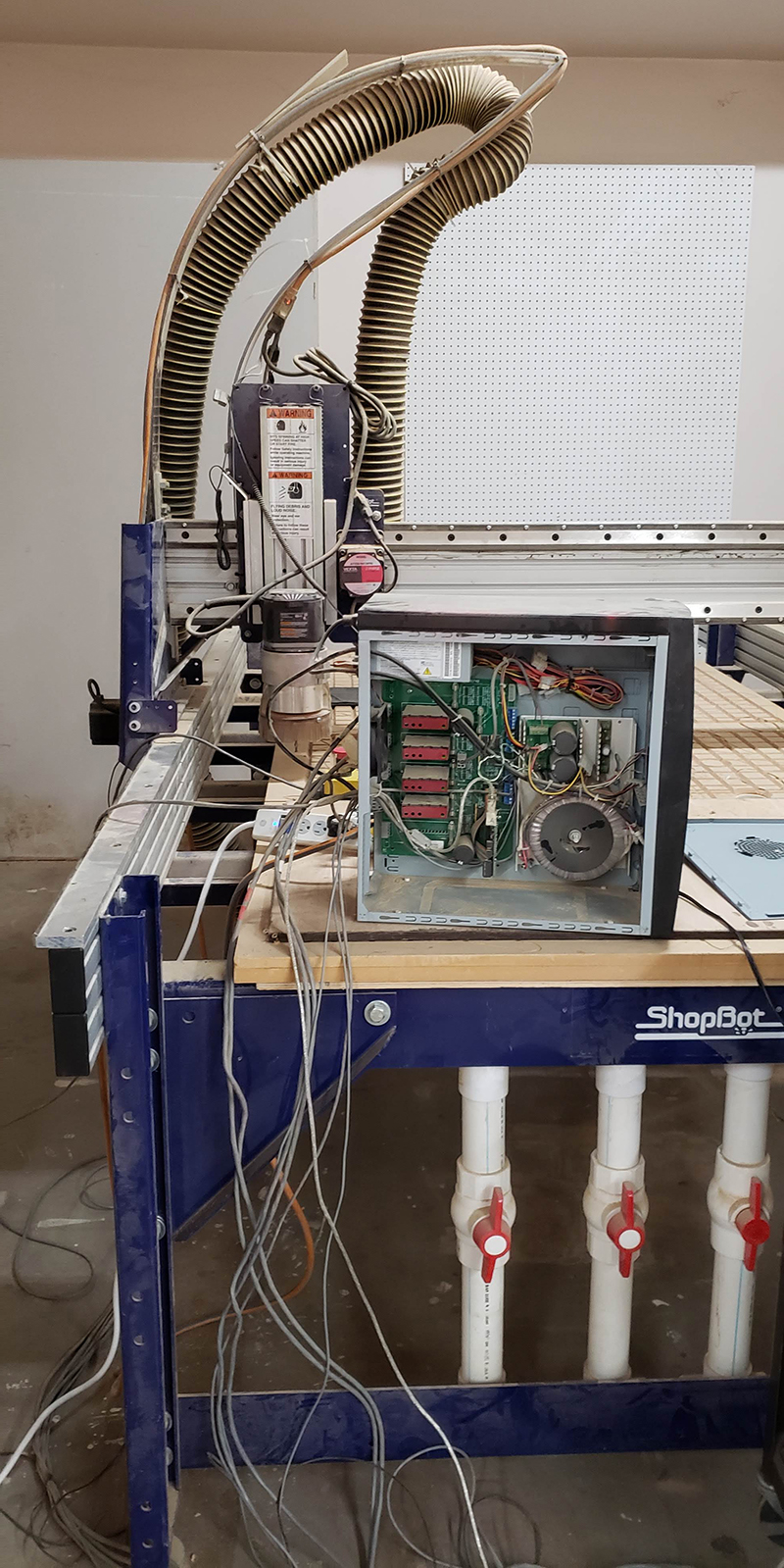 ShopBot readied for troubleshooting and tune-up.

The Control Box, Motors, and Drivers: While each individual problem can be easy to fix, a series of little problems can add up and be difficult to diagnose when you aren’t seeing the tool in person. In this case, the control box was built in 2008, and the control card ready for a USB connection to the computer. A Standard model (open loop) with v4g drivers, while older, is fully functional and the drivers are robust. When it was plugged in and turned on, all four drivers came to life. I always start with my personal laptop, since I know that it usually connects to the ShopBot but, it didn’t connect. With a little help from Tech Support, I discovered that the 24v power supply was hooked up in the control box, but the 5v power supply was disconnected. It’s not something that would just fall out, so some work on the Control Box must have been done in the past. As soon as the 5v power supply was plugged it, all was well.

The computer that was originally assigned to the ShopBot was out of date, and no one knew the password. LJ provided a newer model that was set up with administrative privileges, but ShopBot SB3 software v.3.5.5 was out-of-date by many years. New ShopBot Software (3.8.5 as of 2/4/2021) was downloaded (free of charge) from the ShopBot website and the newly purchased version of VCarve Pro was loaded and tested on the school’s computer.

After removing some of the grease on the pinion gears, tightening the gears on the motor shaft, and reseating the gears in the rack, I moved the control box to under the table. Following that move of control box and cables, there was an intermittent loss of power to one of the drivers. Following the motor cables from control box to motor, it is possible that one of the wires at the motor connector could have loosened. All wires were reseated, and a new heat shrink for that connection was ordered. 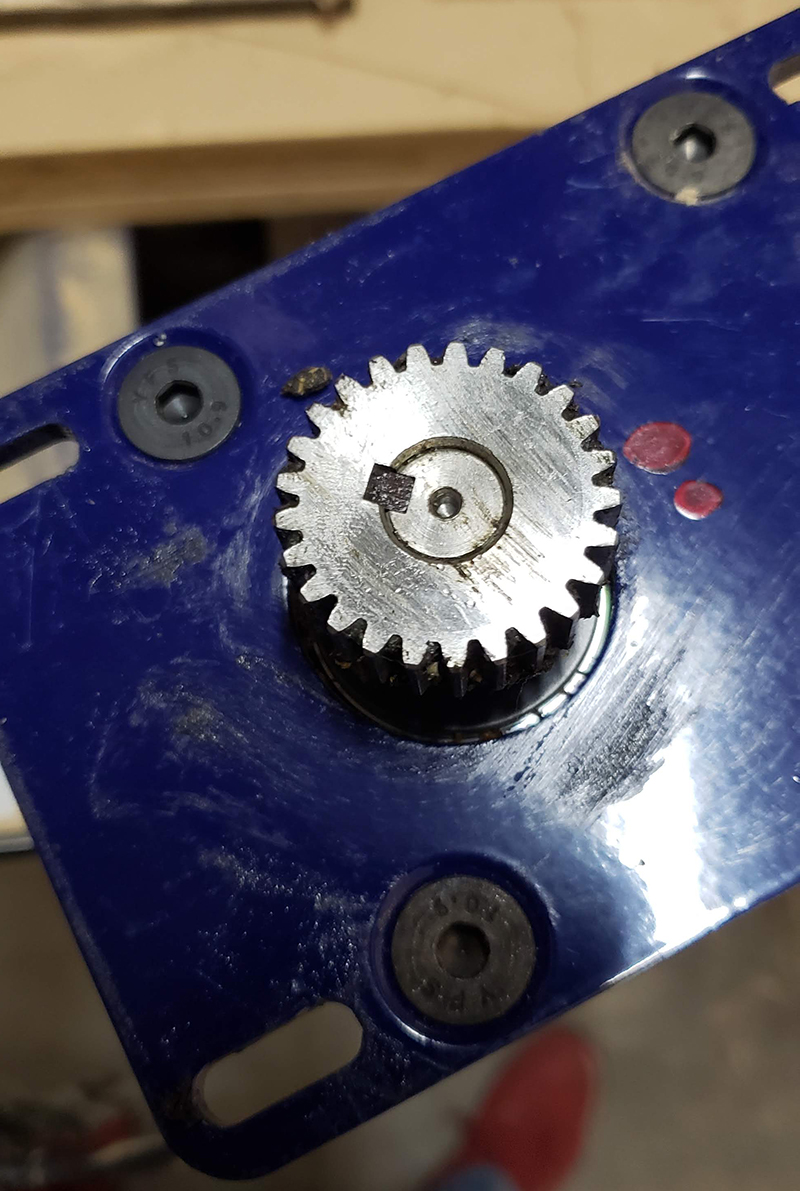 Motor Cable Connector out of heat shrink. Suspicious wrap of electrical tape suggests wires may have been pulled out of connector and not reseated properly.

With the ShopBot now in action, LJ and Jake designed a simple sign in VCarve Pro and went through the check list to prepare for cutting a file. They used the proximity switches to zero the X and Y, and the Z Zero plate to zero the Z. The 14-year-old ShopBot performed perfectly. 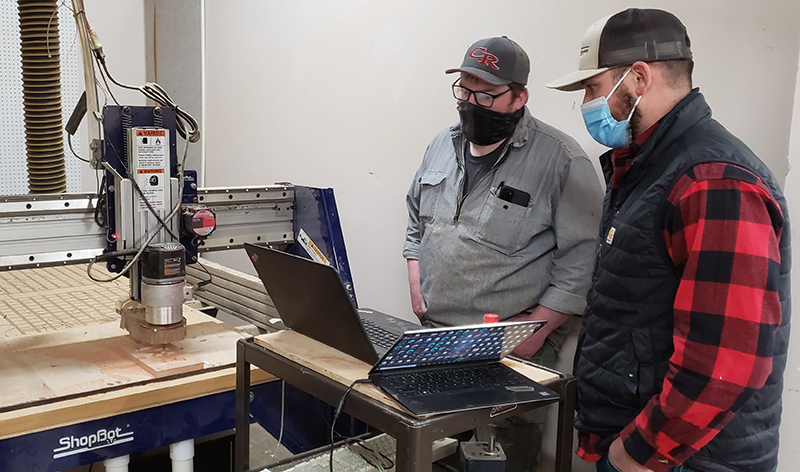 Watching the ShopBot cut out a sign with a 1/4" end mill bit. 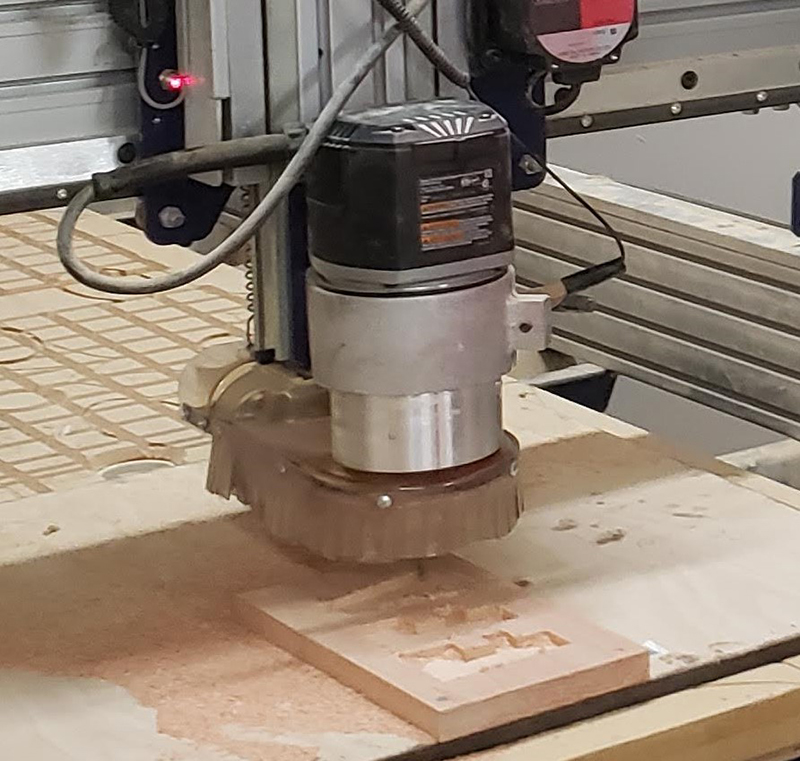 Close-up of ShopBot in action.

Next steps: At the time of my visit, the wood shop was being reorganized. It didn’t make sense to level the table and redo the plenum or support board until the tool is in its new location, so those steps will be taken care of on my next visit.

These teachers see the potential of CNC technology. ShopBot is happy to be a part of their tool revival and training. Do you know anyone with an older ShopBot? Chances are, we can help upgrade their tool to function as good as new!

Need to revive your ShopBot?

Tech Support can help you identify the ShopBot tool you have. Here is a document that will help you help them identify your model and control system. Some systems just need a little tweaking, while others may need to have new parts to bring the tool up to date.

If your ShopBot is mostly working, but has a few quirks, it may just need a tune-up. This troubleshooting document will help figure out where to look and what to tweak/replace to round up those ovals.

Often, training a new teacher or batch of students is all that is necessary to restore the ShopBot to its former glory. Until the COVID-19 pandemic gets under control, ShopBot is not offering in-person training at headquarters. There are many videos, tutorials, and additional information on the ShopBot website.