If you are interested in a test drive to check out the software, the ShopBot Control Software will run in Preview Mode without being connected to a ShopBot and you are welcome to download and try it out.

Fill out my online form.

VERSION 3.8.x was a major update to the ShopBot Control Software.

It is possible to upgrade most ShopBots to the latest V2xx Control Cards, though not all features will be supported on older tools. Give tech support a call to find out whether a new Control Card would be beneficial for your tool.

Download the installation program to your computer, then run it to install the ShopBot Control Software. If your outboard Controller firmware is outdated, you will be prompted to reload it when you next run the software using Utility › Install Firmware [UI]. Any late-breaking information will display in a readme message at the end of the installation process.

In case where you need an older version

Version 3.8.4 -- Maintenance Update 3/24/13
- Two primary issues addressed in this release:
= A "slow down" in motion that happens when running a file, once started it continues (tends to occur with
slower processors)
= A period of "erratic motion" that is followed by communications disruptions and continuation problems
(also primarily with slower processors)
**Both problems found their way into the initial release version but did not show up in final screening; now repaired
- All control cards should now support a hot swap; retained location when controller USB plugged into another
computer (assuming not turned off)
- Fixed bug that can occur when an axis is swapped within a file
- Added additional diagonistic LED signal on Control Card; will cycle on and off @~8seconds when not
connected to PC but functioning normally
- [VD,,,0] and [VD,,,1] can now be used at start of a file to force file to run in INCHES or MM. Also works for
G20 and G21 (the G-code verison)

Version 3.8.8 -- Maintenance Update (FIRMWARE UPDATE REQUIRED; included) 8/28/13
- Now allowing Input from #2 and #4 as responses to Spindle On ? question for Handibots (requires appropriate
serial number)
- #4 Input response for Standards and and Desktops also fixed
- Modified arrow keys for Handibot tablet Z (PGUP/PGDN via Alt-ArrowUP/DN)
- Improved error correction in probing
- Fixed problem with Stopping at speeds of .4ips and below
- Synced file line display of code in Console screen
- Z pull-up error in multiple toolpath files fixed
- Fixed problem with Preview Display of multiple toolpath files where post inserted duplicate definitions
- Fixed problem with spindle turning off when commands entered manually from keyboard
- Fixed protection on ShopBot Setup to allow it to function without a special Admin start; also fixed shift to metric
in Setup routine
- Fixed problem in some situation with Z-Zero not returning to correct location at end of routine

Version 3.8.10 -- Maintenance Update 11/6/13
- Install includes a Settings file for the new Handibot Tools
- Install includes BZero.sbp; MTC adds B axis tool change and fixes Change_A [VI] command
- When using Keypad, "Fixed Distance" moves will now update location display in Keypad readout
- Fixed location updating so that when a "Limit Switch" is hit in Keypad mode the location is correctly reported
- Vachole.sbp subroutine Part File added to 120 and 144 size Vacuum Table folders (it had been missing)
- Probe-2-Surface returned as a virtual tool; note that depending on file type, some editing of the first few moves may
be required
- Command Reference updated for MS vs VS "stack" features and for CP motion (not Jog)

Version 3.8.12 -- Maintenance Update (FIRMWARE UPDATE REQUIRED; included) 1/24/14
- [UR] (Reset Settings) no longer showing option to delete SbSys.Log in ; makes it more permanent; delete
from C:\ProgramData\ShopBot\ShopBot 3
- [UR] fixed problem with running from mm for some settings files; now stays in mm if called from mm
- Updated math precision to prevent rounding error causing shift to slow speed in some long files
- In Keypad, Fixed Distance Moves now supported for Rotary (deg) Axes. NOTE! to avoid needing to input a
separate distance for just for the rotary axis: if you are in inches, rotation will be X10 the inch
distance in degrees; if you are in mm, rotation will be X0.10 mm distance in degrees
- In Keypad, Memorized location move pull-up warning improved in comparing current Z/A location
- In Keypad, (a new) Memorized locations will be converted to current units before the move if units do not
match the recorded value. E.g. a location recorded as 2,1 in inches, will send tool to 50.8, 25.4 if
the software is in mm mode. (You need to re-input older locations for this fuctionality to take effect.)
- Fixed inconsistencies in (rarely-used) positive plunge system; we only recommend positive plunge for special
situations
- Improved spindle shut-down if communications lost
- In C2 (Z-zero) routine; there is no longer an automatic pull up to Safe-Z height before touching off on the
plate. The assumption being that you could not run the routine if you weren't above the plate. (The pull-up
still occurs after each touch-off on the plate. Use [VC] to reduce the Safe-A pull-up if you do not want to
pull up as high. The default value is 1.0inches/25.4mm for most tools, .5in/12.7mm for Desktops and
Handibot.)

Version 3.8.14 -- Maintenance Update 3/19/14
- Fixed some issues with conversion between metric and inches when using ShopBot Setup under [T]ools
- Fixed highlight line location in small file display; e.g. showed up in spindle warm-up routine
- Updated Handibot Settings file to create -.05 offsets from prox switches
- Barcode scanner added as option in "Button" system; see c:\Program Folders\ShopBot\VirtualTools\Buttons
- Fixed problem with FG that prevent a restart on a line before a J3
- Improved the handling of variables in the "SHELL" Programming Instruction and with Virtual Tool starts.
See examples in Programming Handbook.
- Added functionality for using a Z-axis Proximity Switch with C2 and C3. If you have a tool with a Z-prox
use Setup under Tools to configure it to be able to re-position the cutter that was last Z-Zeroed.

Version 3.8.32 -- Maintenance Update 5/25/15
-Fixed problem with RESUME after STOP during a JOG (in which Z is below pull-up height)
-FIxed problem with ramps/speed in first file when software has been started in Preview Mode

Version 3.8.36 -- Maintenance Update 7/18/15
-Fixes file-breaking problem that occurs with inline speed changes [VS] within an SBP or g-code file where
the speeds are very slow (< 1 inch/sec or < 25mm/sec); now handled with a stack break that should be
smooth.


(Note that all Installs of ShopBot Software include a README file and an Update History file that detail changes in the software across versions and releases.)

Functional Improvements (made possible by capabilities of the 2xx series of Control Cards; not applicable for earlier Control Cards).  This is the new stuff under the hood!

New Control Software and UI Features.  These are the enhancement in how it works!

How to Identify a Version 2xx Control Card (Card will be mounted on your Control Board which is different for each type of ShopBot.) 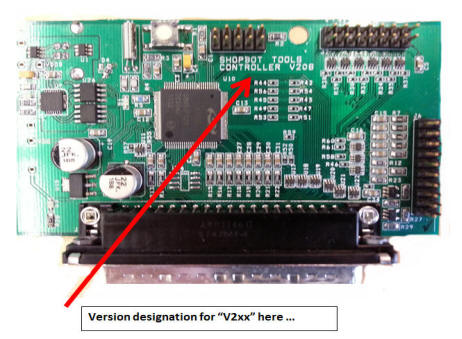 For PRT ShopBots (7/2004 - 9/2007 and early PRS, with xplor52 Control Cards [using a Dallas microcontroller]; these systems used USB communications via a serial to USB adapter plugged into the serial connector on the larger board.)

Download the installation program to your computer, then run it to install the ShopBot Control Software. If your outboard Controller firmware is outdated, you will be prompted to reload it when you next run the software. A readme file will display any late-breaking information at the end of the installation process.

(This version is identical to 3.6.44 with the exception that some of the included file have been updated. These include files for vacuum tables, the MTC file that handles manual tool change instructions, and Copy Machine Tool for probing. This version also includes a folder with our "probe to surface translator" which was inadvertently left out of 3.6.44).

Download the self-extracting installation program to your computer, then run it to install the software. If your outboard software is outdated, you will be prompted to reload during the install. A readme file will display any late-breaking information at the end of the installation process. PRTstandard control box looks like a computer CPU either beige, silver, or black.

Download the self-extracting installation program to your computer, then run it to install the software. A readme file will display any late-breaking information at the end of the installation process.

*this version cannot be used with Windows NT/2000/XP/Vista/7/8)
It is possible to install the DOS version on a Windows XP or 2000 computer to run in PREVIEW mode only. To do so: change the C:\windows\temp to C:\sb200 when asked where to unzip files. This will put everything in the SB200 directory. You should then move all .sbp files to the SBPARTS directory.

© 2006-2020 by ShopBot Tools, Inc. All rights reserved.
Terms of Service
ShopBot Tools Warranty
All information is correct to the best of our knowledge but prices, descriptions, and typos may change without warning.
All prices and costs published by ShopBot (both digitally and in print) are based on orders within the contiguous USA.
All other orders may incur additional costs/fees.