ShopBot CNC in Japan - The ShopBot and VUILD Partnership

Earlier this year, ShopBot's Brian Owen visited our partners in Japan, VUILD. Soon after Brian's return home, the translator and assistant to the COO of VUILD, Coco, sent us this newspaper clipping with the translation (below). We plan to have both Brian and representatives from VUILD write more articles for the ShopBot blog in the near future. Enjoy! 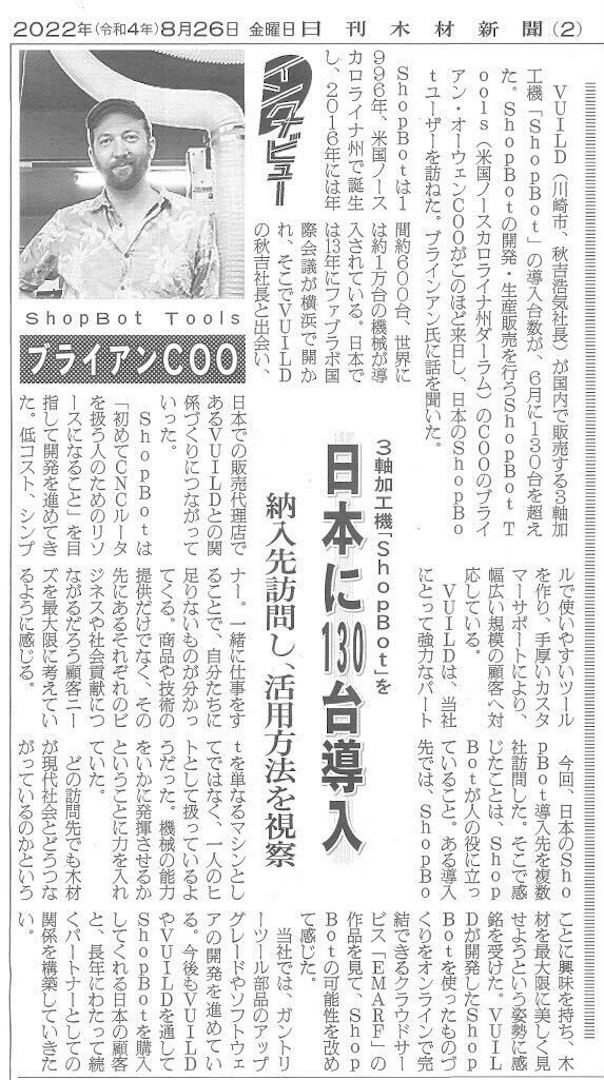 Hi Brian and everyone at ShopBot,

I would like to share an article about ShopBot and Brian that has been published in a Japanese newspaper. Please have a look!

(*I apologize that the job title for Brian is still COO in the article, I could not fix it because the deadline for submission was before Brian's position change.)

Thank you so much for your cooperation and support.

Here is the translation:

ShopBot began in 1996 in North Carolina, U.S.A., and has grown to about 600 units per year as of 2016, and about 10,000 machines have been installed worldwide. In Japan, the FabLab International Conference was held in Yokohama in 2001, where ShopBot met VUILD CEO Koki Akiyoshi, who is the distributor in Japan. This led to the creation of a relationship with VUILD.

Brian tells us, "ShopBot has been developed with the goal of becoming a resource for people who are dealing with CNC routers for the first time. We have created a low-cost, simple, and easy-to-use tool, and our generous customer support enables us to serve a wide range of customers of all sizes.

VUILD is a strong partner for us. By working together, we understand what we are lacking. We feel that they not only provide products and technology, but also give maximum consideration to customer needs that will lead to their respective businesses and social contributions beyond that.

I visited several companies that have introduced ShopBot in Japan. What I felt was that ShopBot is useful for people. One company seemed to treat ShopBot not as a mere machine, but as a human being. They were focusing on how to make the machine work to its full potential. At all of the places I visited, I was interested in how wood is connected to modern society, and was impressed by their attitude of trying to make wood look as beautiful as possible.

VUILD has developed a new home building service using ShopBot, "NESTING", and the cloud service "EMARF" which allows users to complete manufacturing online, reminded me once again of the potential of ShopBot. We are working on upgrading gantry tool components and developing software. We hope to continue to build long-lasting partnerships with VUILD and the Japanese customers who purchase ShopBot through VUILD."