One of the advantages of ShopBot’s semi-modular system is that a user can customize the ShopBot to fit their application. Cerro Pacific lumberyard created a custom hold-down technique and way to remove waste from the cutting table that fits their production use of manufacturing risers out of redwood blanks.

During Sallye Coyle’s first visit to Cerro Pacific, she and Plant Manager Roberto Carillo evaluated whether a ShopBot gantry tool could replace the bandsaw method for making the 3, 4 and 5 step risers. During the initial tests, they set up the ShopBot with the standard support board and sacrificial board and used screws to hold the material in place. Since screwing the parts down in a production setting was not practical, they needed another hold down technique. A Universal Vacuum Hold-Down would not be suitable for this production situation because the blanks are too small and potentially too warped to achieve a strong enough vacuum, and it would take too much effort to clean dust and waste from the vacuum table in between cuts to get a good vacuum seal.

After Sallye’s first visit, Roberto and owner Lee Burgees reworked the bed of the ShopBot to mechanically hold down the irregularly sized blanks for heavy machining. They also wanted to rapidly clear the table of the large chunks of wood and sawdust waste so the next piece could be started. They removed the plywood sacrificial board and support board and replaced them with aluminum parts. The aluminum pieces would support the blanks while machining and allow the waste pieces to fall under the table. Lee and Roberto also used a pneumatic cam system to clamp the material while aggressively cutting it.

Then they asked Sallye to return to help fine tune and test the system.

Some adjustments were mechanical:

·     Adjusting pressure on the hold down clamps.

·     Adding switches to position the clamps for hold down. Each side works independently so one side can be loaded while the other is cutting.

·     Adding stops to position the blanks.

·     The Z was set to zero at the table surface to compensate for slight differences in the thickness of the blanks.

·     In the CAD file, the exact location of each blank against the stops and cross support was determined in the design file (red layer).

·     The cut line vector was offset by the radius of the bit to allow for cutter waste in a Profile on the Vector toolpath.

·     The cut line vector was extended beyond the blank to ensure that the waste was cut into smaller pieces to fall under the table. This also compensated for slight differences in the width of the blanks. 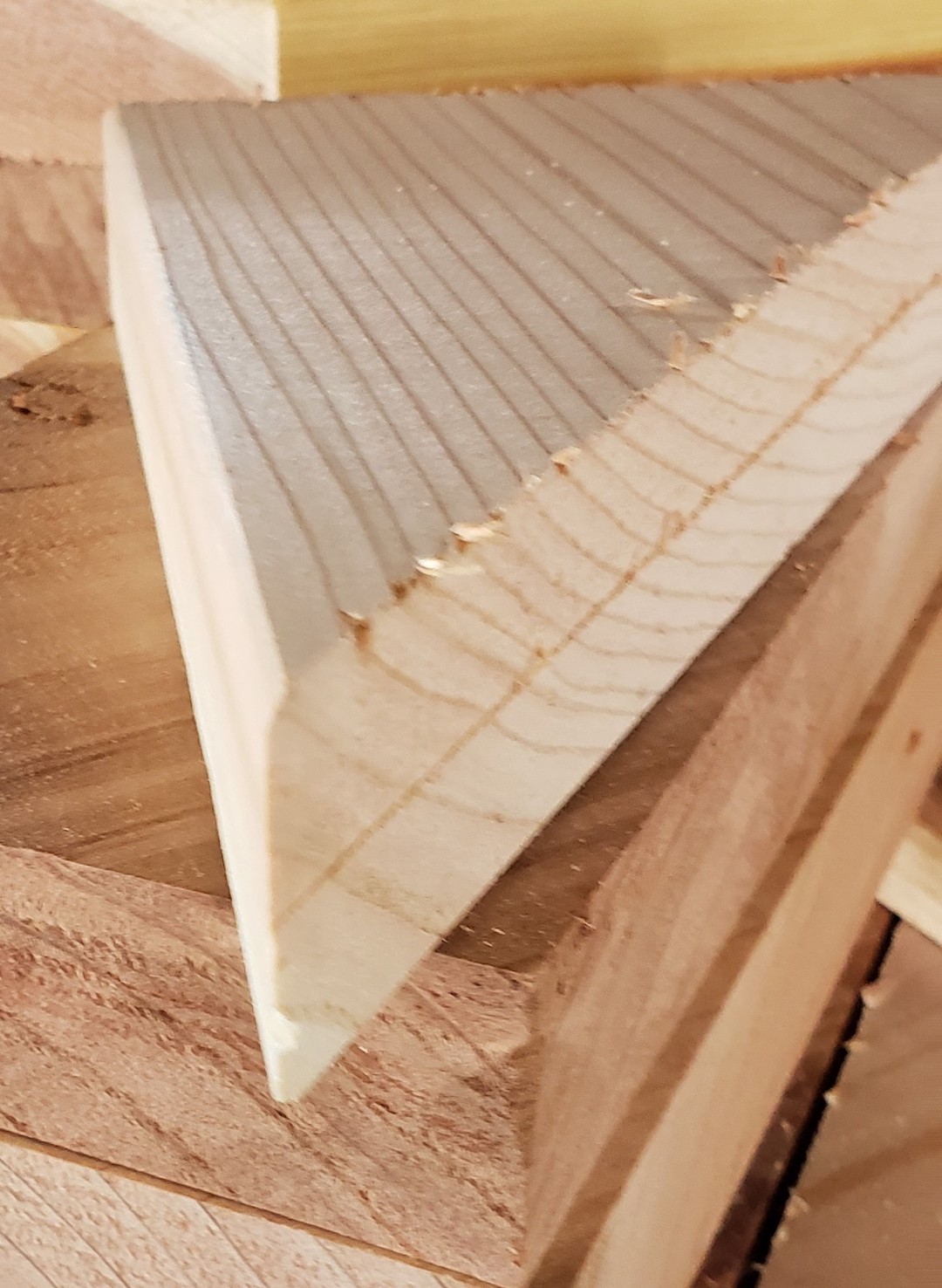 Example of ridges in one side of the material (top triangle) vs. smooth cuts in the other side. If the ridges show up in the part you want to keep in a profile along a vector’s toolpath, try adjusting the start point so that the first pass pulls the bit away from the important side, and the second pass pulls into the important side, smoothing out the slight difference. Hey, it’s physics.

All the adjusting and tweaking and testing takes time, but Lee and Roberto are in it for the long haul.  Watching the chips fall in the morning sunlight was a thing of beauty.

Next up, in part 3: Preparing for Production