On a bright sunny day in early May, I found myself driving to the town of Fairview, just south of Asheville, North Carolina to visit Pisgah Banjos. Once off the main road, a series of winding roads led to rolling hills of farmland and the home of Patrick Sawyer, founder of Pisgah Banjos. Someone was gardening in the distance, a few folks were chatting at the front of the house, and what looked to be about five or six dogs were running around in a large, fenced area having a blast. There was a barn-shaped, detached garage and what looked to be a guest house off to the side. I thought, “Where’s the banjo shop?” The answer being, around back!

Once I walked down the gravel drive around the garage, a massive building appeared with the “Pisgah Banjo” logo on the front corner in funky, large rusty lettering. Upon entering the building, Melissa, who oversees shipping/receiving and customer service, was prepared to provide the first part of a tour of their facility while Patrick was finishing up some work for their new addition. 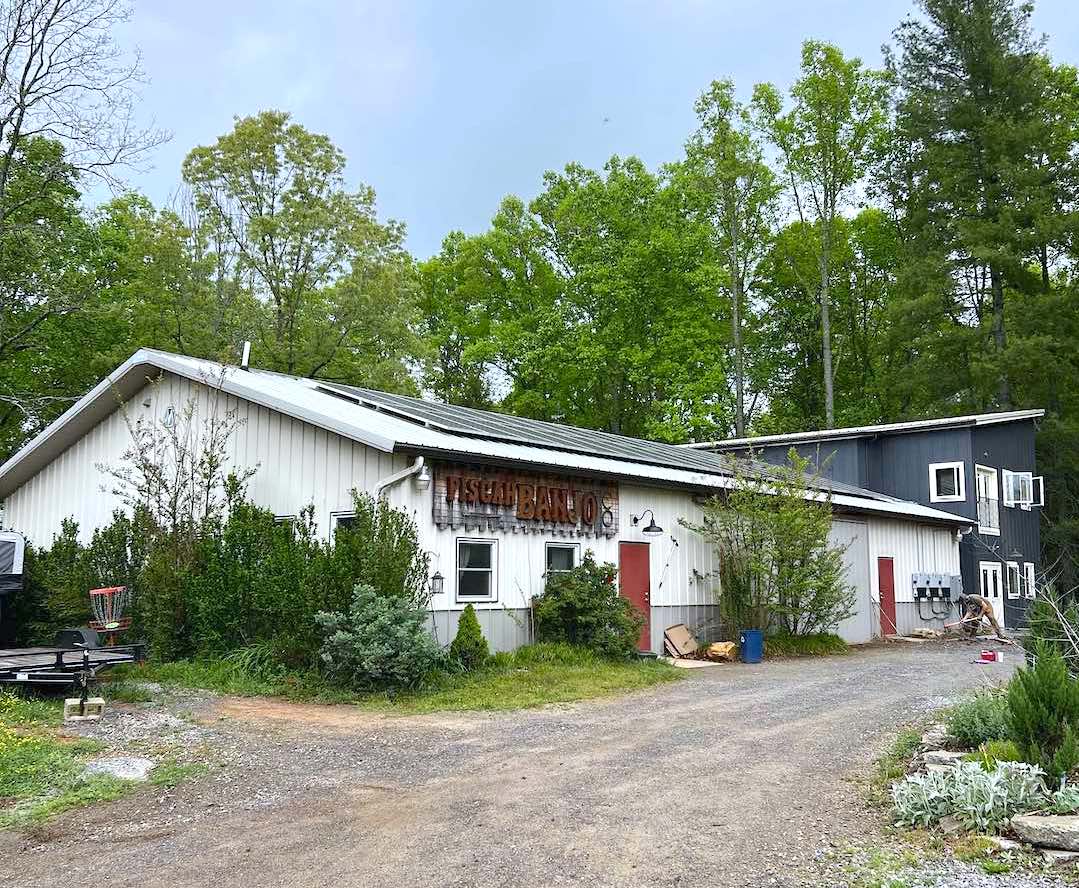 Pisgah Banjos has been in business since 2012, however, Patrick built his first banjo as a freshman in college at Appalachian State University in 2005 under the guidance of local Beech Mountain builder, Charlie Glynn. Today, Pisgah Banjos is the 3rd largest banjo manufacturer in the country next to Deering® Banjos and Gold Tone Music Group. Patrick also mentioned, “We’re the largest banjo company that I know of only making and specializing in open back banjos.” It’s also notable that their facility runs 100% on solar power and they source native Appalachian lumber.

The shop tour started in the kitchen and showroom, went on to the shipping and staging area, then onto a few different rooms for various stages of building banjos. I had a great time chatting with employees Jack, Matt and Claire about some similarities between Pisgah’s workshop and an acoustic guitar workshop I used to work at in Hillsborough, NC. 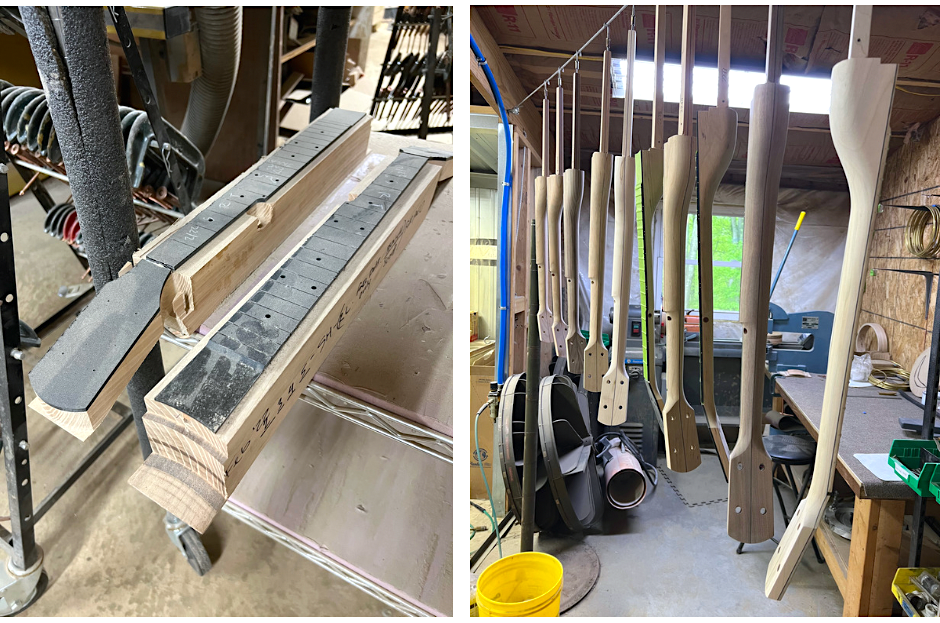 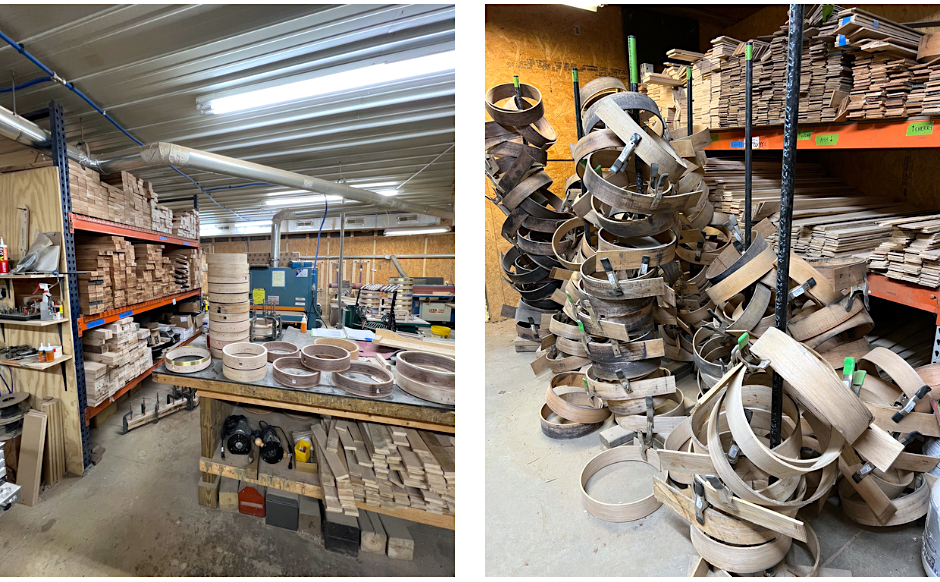 With many traditional hand-work processes in place through this facility, you may ask yourself, “Where does ShopBot CNC come into play?” In more ways than you might think! Pisgah Banjo has a ShopBot PRSalpha ATC that produces a variety of parts for their instruments. Bridge pieces, Delrin nuts, fretboards, headstock profiles, and even brass scoops, are all produced with the precise repeatability of their ShopBot. There are more CNC processes in development that they hope to share with the public in the near future. However, don’t let talk of CNC-made items lead you to believe these instruments aren’t hand-made. There are endless amounts of processes done by hand, from sanding to finish work, setups, and so much more. Ask them. They’ll give you the run-down! ShopBot CNC provides a way to produce multiple precisely routed parts to speed up certain aspects of production that would normally take much longer by hand. While the CNC machine is cutting, rest-assured, hand-work is being performed elsewhere in the shop. 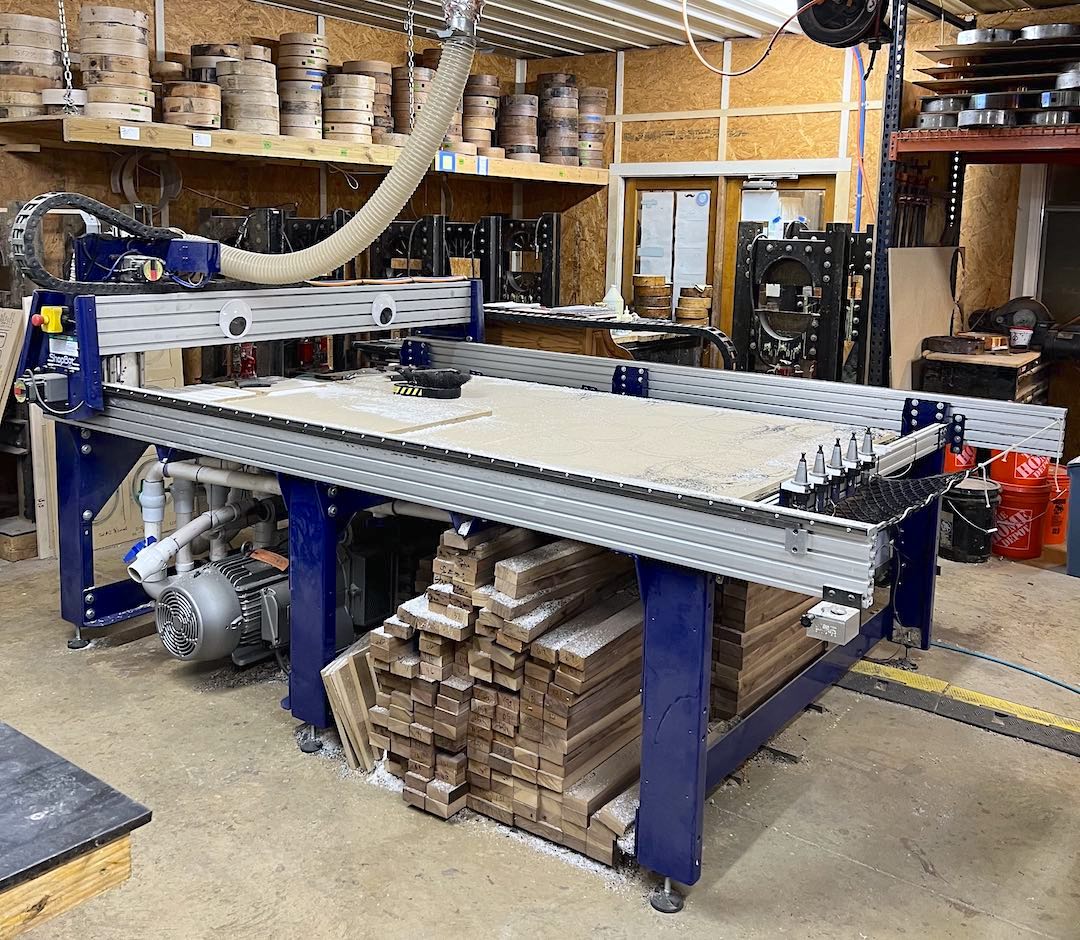 ShopBot PRSalpha ATC with a small sheet of Delrin for banjo nuts, ready for precision cuts.

Patrick took over the tour about halfway through to show how a few of the processes are done. When I asked if there was anything I should not photograph, Patrick said, “Take as many photos as you want! There are no real secrets left in the banjo industry.” After seeing everything in the building, I was then shown a brand-new addition that will soon house metal working on the basement level, fretwork, sanding, and preassembly on the first floor, and finishing, setup, and assembly on the second floor.

A sampling of banjo models made by Pisgah Banjo

Check out the Pisgah Banjo website and social media accounts for more info, and if you’re interested in seeing where some of the nicest banjos in the world are made, ask nicely and I’m sure they’ll give you the grand tour if you visit Asheville. Upon publishing of this article, Patrick will be just wrapping up displaying his instruments at The Clifftop Old-Time Festival in West Virginia. Their next event will be The Banjo Gathering in Baltimore, MD, which is a conference on all things historic banjos. Patrick will be giving a talk entitled "1000 banjos a year: Incorporating lean manufacturing process into modern open back banjo production". He says he’ll be sure and mention their CNC machine and ShopBot as an integral part of their lean process.

Oh, and that project Patrick was working on when I first arrived was smoothing out a handicap parking slab, all by himself, to comply with regulations related to his new building. It doesn’t get much more hands-on than that! We're looking forward to sharing more info and media from their new addition once it's complete. The future of hand-made open-back Banjos is bright, thanks to Pisgah Banjos.