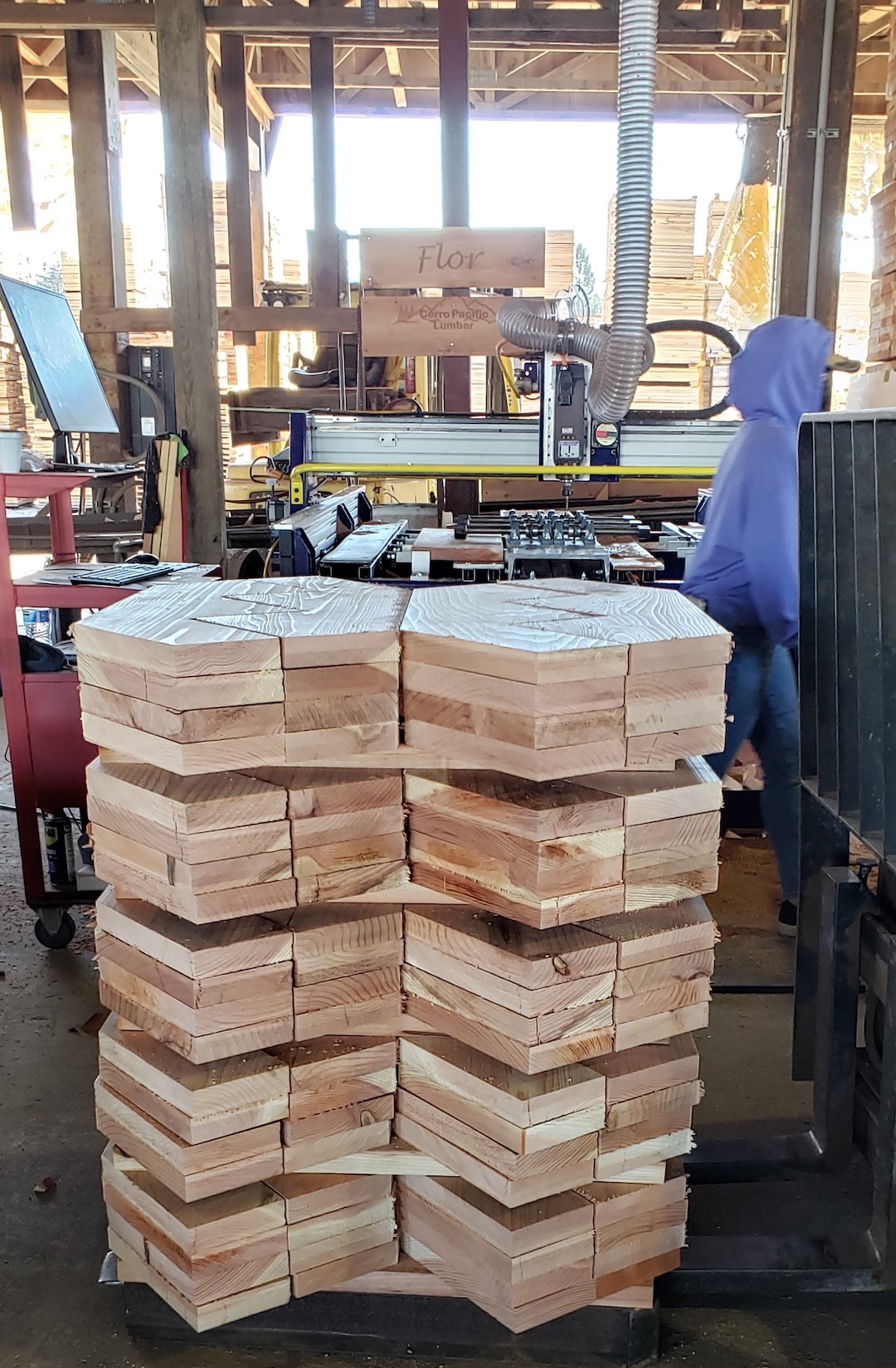 Now that the basic techniques for cutting risers with the ShopBot were in place, it was necessary to turn the CNC into the primary production tool. Due to Covid-induced supply chain problems, the bandsaws had been out of blades for weeks, and it was estimated that it would be at least another 6 weeks before any arrived. Cerro Pacific had orders for thousands of risers that they had not been able to supply.

Plant Manager Roberto Cabrillo and ShopBot’s Sallye Coyle now brought in the young women who had been cutting risers with the band saw to formally introduce them to the CNC. Due to the youth of the woman, as well as a bit of a language barrier, they were hesitant in starting to use the computer and the CNC. While they had been exposed to the ShopBot during the first visit, they had not touched it since then.

Roberto worked with Flora to remind her of the computer side of the process, and to show her how to load and unload the blanks.

To enhance the production experience, Sallye wrote a Master File* in ShopBot code that would call up individual ShopBot part files to alternate the right side and left side cuts so the operator just had to press a single key to start the next file. Completed risers were fitted together for stacking, banding, and shipping.

By the morning of second day of using the ShopBot for production, Flora was quite comfortable loading the blanks into position, starting a file, then clearing the open side while the other side was machining. She reported that she found it easier to do than the bandsaw method. Using the CNC equipment, one person could complete more risers than two people using the bandsaws, with less chance of injury. 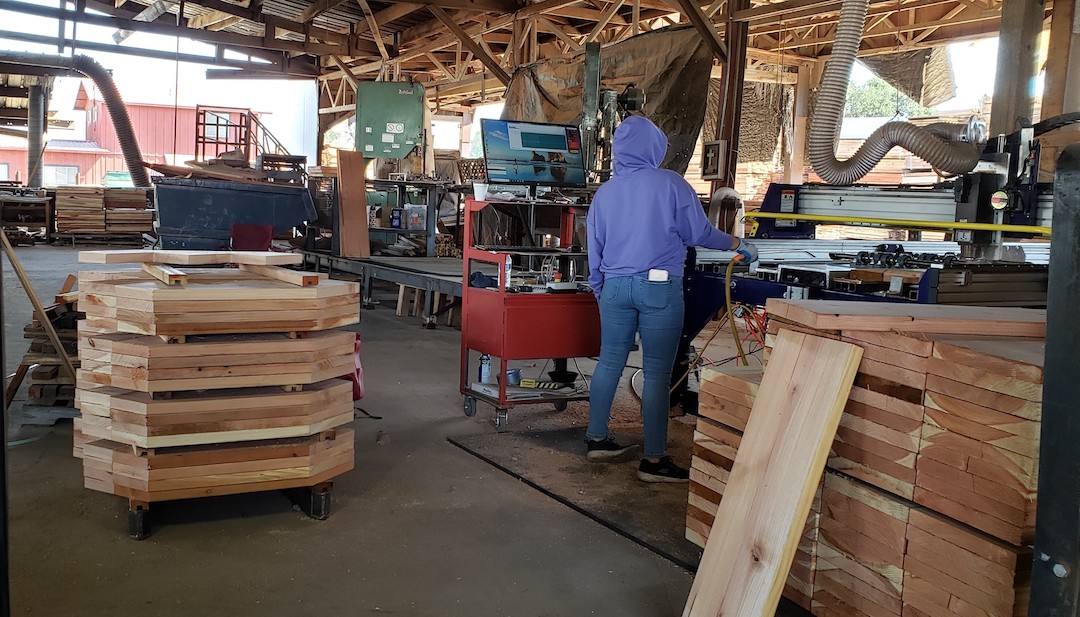 Flora in production mode, clearing the table of sawdust before loading the next blank. As she had done when using the band saw, Flora inspected each blank before loading, and rejected blanks that were split or had knots in inconvenient places. Note the completed risers stacked on the left.

Training for Production also included tool set up (turning on all the equipment, zeroing everything, troubleshooting) and maintenance (changing a bit, testing that pinion gears were seated in the rack properly). With a little help from Roberto and Google translate, Sallye wrote instructions in English and Spanish so that Flora and her colleagues could work independently. She also wrote an .sbp file with step-by-step instructions for the end of day routine to park the spindle before turning off the ShopBot Control Box and compressor.

There was still an issue to be resolved: What to do with the wood chunks under the table? 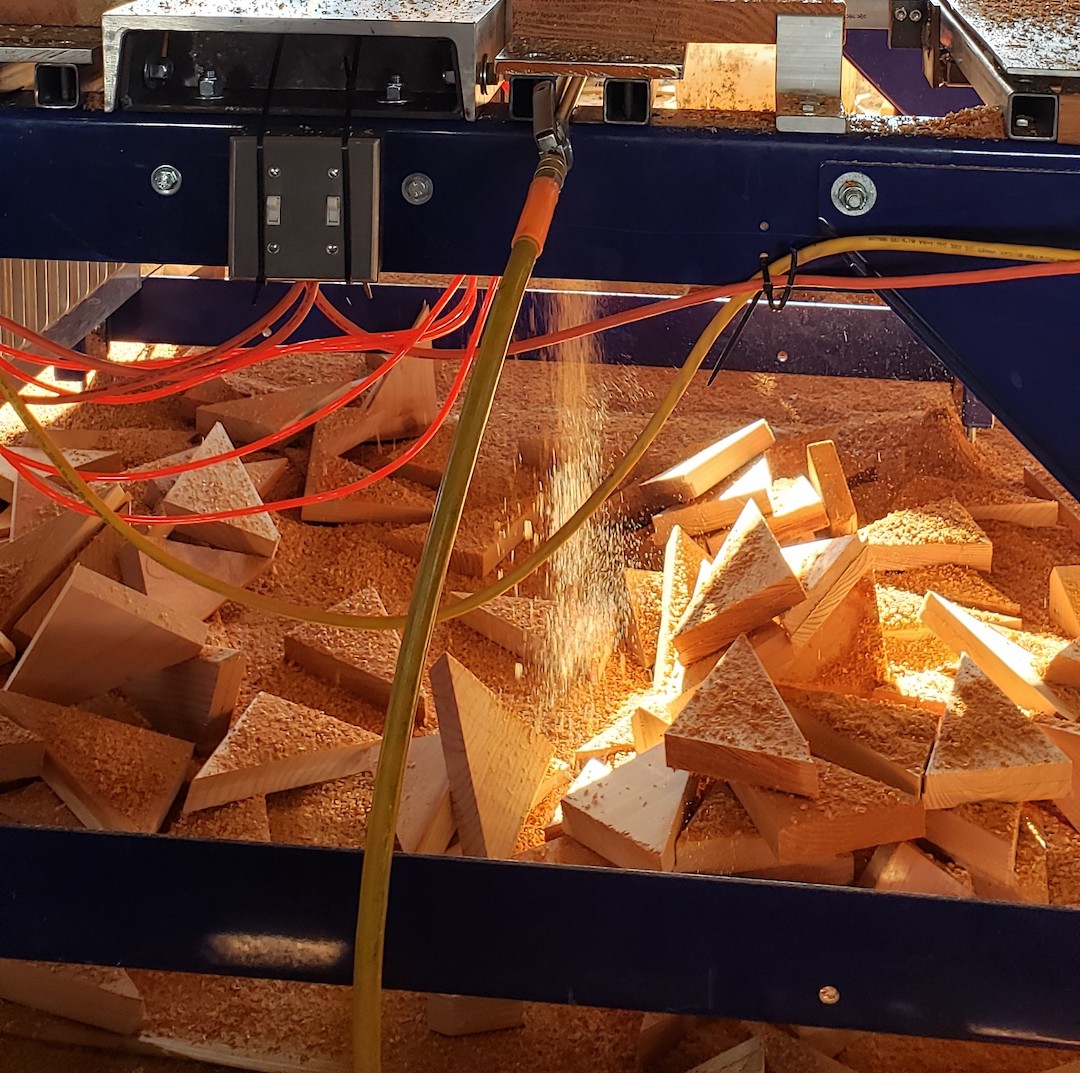 Modifying the table and hold down technique cleared the cutting table of waste, but the big chunks and sawdust still had to be moved manually from under the table.

Epilogue: Roberto sent a video of a conveyor belt system that moved the waste from under the table and into the existing waste conveyor system.

Cerro Pacific has ordered a second ShopBot. Sallye is looking forward to visiting to ensure that it is doing what they would like it to do within their production process.

*The ShopBot User Guide, found under HELP in the SB3 software, has a section on creating master files (nesting or embedding part files) and using the PAUSE command to display instructions on the screen.